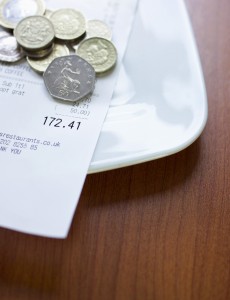 Has tipping reached its tipping point ?

Where does it come from

While the precise origin of tipping is uncertain, it is commonly traced to Tudor England, according to “Tipping,” Kerry Segrave’s history of the custom. By the 17th century, it was expected that overnight guests to private homes would provide sums of money, known as vails, to the host’s servants. Soon after, customers began tipping in London coffeehouses and other commercial establishments. At some point within the next century, this sense of the word spread to being used by non-thieves as referring to money given as a bonus for service rendered. Frequently, bowls were printed with the words “To Insure Promptitude,” and some speculate that “tip” is an acronym for this phrase.

The struggle with tip

But there is a permanent struggle with tip: Why tip at all, since the bill is presented at the end of a meal and can’t retroactively improve service? And some people would argue even that there certainly is no reason to tip at a restaurant you will never revisit? The dining community today still seem to prefer tipping to paying a service fee, according to a recent Zagat Survey. They do so, primarily because they believe tipping provides an incentive for good service. But there is little correlation, in fact tipping, its defenders say, improves service by rewarding good waiters and punishing bad ones

But that’s not what a number of restaurant owners see when they look out on their restaurant floors. Working with tips encourages selfishness rather than teamwork. Moreover, good service is not always rewarded with a big tip, nor bad service with a poor one. And on the other side, the staff are squabbling, mainly over money: waiters are angling for better shifts and tables, and the kitchen workers didn’t feel they were getting a fair share of the profits.

There is no profession in the world that works like this, so why should the restaurant business?

The psychological factors of tipping

The single most important factor in determining the amount of a tip is the size of the bill. Diners generally tip the same percentage no matter the quality of the service and no matter the setting or the fact that a highly priced bottle of wine was ordered. They do so, largely because it is expected and diners fear social disapproval. “It is embarrassing to have another person wait on you,” the psychologist Ernest Dichter told a magazine reporter in 1960. “The need to pay, psychologically, for the guilt involved in the unequal relationship is so strong that very few are able to ignore it.” Ego needs also play a part, especially when it comes to over-tipping, according to the Israeli social psychologist Boas Shamir. To tip someone was as much about establishing a hierarchy between superior and inferior as it was about compensating a waiter, valet or servant. Giving a tip as a power play, and accepting one as a sign of servility.

How would one feel about eliminating tipping all in all?

This question strikes at the very heart of our dining experience. While anxieties surrounding tipping are prevalent — is 15 percent enough? 20? And who is the recipient on the bill? And is this fair seeing that waiters rely on tips for the bulk of their income — But a service charge is free of such constraints. It’s also fully taxed, while waiters, on average, fail to report most their tips ….Indeed, at the few restaurants in this country have adopted a fixed service charge,  mainly for a certain size table, diners often leave additional tips.

Famous restaurateur Alice Waters of Chez Panisse in Berkeley threw the topic to the customer many years ago— Waters wrote her board: “At our restaurant the quality of the food and the skill and taste of the cooks are at least as central to our success as the quality of the service. Unfortunately, traditional tipping has created great disparities in earning between the serving staff and the cooking and support staff.” By introducing a service charge — currently 17 percent — Waters was able to increase income to the kitchen and solve the issue to the satisfaction of clients and staff.

A set service charge will allow the staff to get to concentrate on the job and looking at their clients without seeing dollar signs or worried about what anyone else is making.

In South Africa specifically, this discussion on service charge could also extend to other services such as the ones rendered by parking attendants and security guards, petrol attendants at gas stations, game rangers in pricey game lodges providing all inclusive services – how much to provide for these specific services in South Africa if one would follow the global trend of elimination of tips for a set service charge?